Note: This post was published in September of 2012. Since this article was published, zoos, aquariums, and museums have continued to engage audiences in unique and creative ways.

Since the creation of this website, I’ve published several posts that simply list online initiatives taking place in zoos, aquariums and museums (ZAMs). These posts have garnered a good bit of traffic and served as the basis for research for several books and articles written regarding museums and social media. Unsurprisingly, ZAMs are currently as creative as ever before (if not even more so) in utilizing social media and social technology to build relationships, increase positive reputation, remain relevant, and engage potential visitors.

In no particular order…

2) Go, go aquariums on Instagram! There are only four so far: National Aquarium, Aquarium of the Pacific, the Birch Aquarium at Scripps, and Newport Aquarium. (Want to see zoos and museums on Instagram, too? Here’s a collection)

3) Thinking with The Thinker. If you find yourself lost in thought, check out The Monterey Museum of Art’s Facebook album, The Thinker, for a good laugh and some self-awareness. 4) Wikipedia in the galleries.Talk about open authority in museums!  In October of 2010, the Brooklyn Museum included Wikipedia into their exhibition on women and pop art, Seductive Subversion. The museum offered iPads throughout the gallery and encouraged visitors to check out Wikipedia pages on artists featured in the exhibition.

5) Help find New York’s cutest baby! Wildlife Conservation Society is having a show-down amongst its entities (Bronx Zoo, Queens Zoo, Prospect Park Zoo, and the New York Aquarium) and is on a quest to determine who has the cutest little animal in town. They’ve turned to online audiences to uncover the favorite. 6) #MuseumOlympics. While the Olympics were taking place in London this year, #museumolympics took place on Twitter. Museums posted hilarious, witty, and downright amazing sports-themed images from their collections. 7) April Fools! The Monterey Bay Aquarium celebrated April Fool’s Day by surreptitiously changing their Facebook Timeline photo and homepage image to the one below…

9) Wrapping in Instagram and Foursquare. And San Diego Zoo is still experimenting with social media engagement through contests. For their Nightime Zoo China Celebration, they are holding contests on Pinterest, Instagram, and Foursquare.

10) History with a side of pie. Colonial Williamsburg’s History is Served provides super fun 18th century recipes for the 20th century kitchen. 11) Making it easy to connect. The Brooklyn Museum makes it easy for folks to find their online engagement platforms by highlighting their social media channels on a single community page. They even recognize key contributors to the site on their posse page.

12) Engagement-driving “content regulars.” Every Friday, the National Aquarium writes an Animal Update blog post and shares colorful pictures from the updates on Facebook. Sound simple? Yes, but it’s also effective. These Facebook posts – along with their Amazing Animal of the Week posts (on Mondays) – drive high and reliable applause and amplification rates (i.e. they get liked and shared a lot). 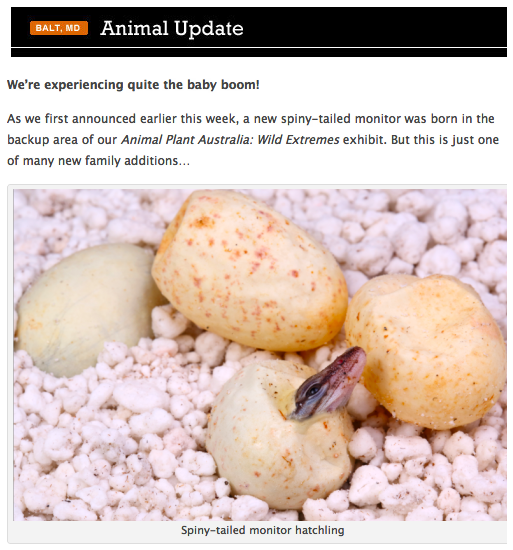 13) A mobile app that facilitates a trip through time. The Museum of London created Streetmuseum, a mobile application that allows users to go through the streets of London and see what present-day scenes/locations looked like back in history, offering a window through time. You can continue this journey by checking out related historical objects in the museum.

14) Starting early on Generation Z. Is there anything cooler or more interactive for kids than Whitney Museum’s For Kids site? Kids can make their own profiles, take polls, and converse in their own forums!

15) Putting visitors on YouTube for a good cause. The Georgia Aquarium got their visitors involved in this youtube video by giving them the opportunity to explain how they feel about World Oceans Day.

16) Learning through online games. The Detroit Historical Society created Building Detroit, an interactive online game that allows audiences to choose their own adventure and play a role in building a city. 17) Sharing timely off-line experience online. These lonesome cockroaches could be spotted looking for some love in early February in hopes of securing a valentine. If you spotted them, took a photo, and posted it on their Facebook page, the Wildlife Conservation Society entered you to win a box of chocolates for your honey (or perhaps for you to share with your new friends, the roaches) on valentines day. 18) An online auction. Need ideas for fundraising online? The Clearwater Marine Aquarium is holding a live online auction to raise money to support the institution’s animal rescues, rehabilitations and releases.

20) Foursquare still has a following! To promote their summer evening music series, the Penn Museum offered free drinks to the first ten folks to check in on foursquare.

21) Looking to the public to choose the next subject for a work of art. The National Museum of American History asked the public to vote on which of five iconic American figures should be memorialized in a new biographical portrait by Robert Weingarten, a noted photographic artist. After more than 11,000 votes cast and a lot of great conversation, the winner was Celia Cruz.

22) Sharing silliness (and some seriousness, too). It’s a classic, but this list really must include “I went to MoMA and…”

23) Selecting and rewarding “insiders.” Similar to the California Academy of Sciences Nightlife Insiders initiative a while back, the Carnegie Science Center put out applications and has chosen six CSC Insiders who are highly connected on social media. They have access to special programs and experiences on the condition that they share their honest assessments with their online audiences and serve as online evangelists.

24) Rewarding online audiences without de-valuing your product. Offering discounts to your zoo, aquarium, or museum is a bad idea for many important reasons, but the Pittsburgh Zoo managed to reward their online audiences with a value-add instead of a discount. They hold Facebook Fan Nights wherein they open the zoo in the after-hours exclusively to social media followers.

25) Engaging in citizen science. The Georgia Aquarium is conducting some sweet citizen science by using social media to seek volunteers who have recently been SCUBA Diving in the Florida Keys in order to assess the state of coral reefs and gain information regarding public awareness of conservation programs. 29) Telling stories to earn donors and support conservation. The National Aquarium understands that engagement is all about storytelling and relevance. Their website features the true stories of ten animals that the Aquarium has rescued and rehabilitated  in order to show potential donors what kind of impact they can make. The Aquarium also used GiveCorps to encourage online donations so that they can build a new Seal Pool to rehabilitate seals. 30) Using Facebook to allow for a deeper connection for special interest. The Tennesse Aquarium maintains an active Facebook page for their Conservation Institue. This page offers another level of  information for folks more interested in science and conservation (and next-level evangelists) than those that might like the Aquarium’s page.

31) Enjoying the mission from your mobile at home. Museums are continuing to find ways to bring experiences and information to folks through technologies with which we are most familiar. For instance, MoMA’s ‘Dial-A-Poem‘ brings users ecstatic language on the go on their mobile phones.

32) Mastering Pinterest. Zoos and Aquariums mastering Pinterest? With 2,073 followers and counting, the Monterey Bay Aquarium is rocking the repins. Here’s a list of some of the early-adopting museums that hopped on this online platform first.

33) Interactive online tours. Can’t make it to Amsterdam? The Secret Annex Online allows you to take an interactive tour of the Ann Frank House. 34) Wikipedians supporting museums. The GLAM-WIKI project supports GLAMs (galleries, libraries, archives museums) and other institutions who want to work with Wikimedia to produce open-access, freely-reusable content for the public. Like the idea behind Wikipedia, the GLAM Wikipedians themselves are transparent, accessible, and highly-connected as they help lead institutions into an age of open authority. Proof of their connectivity? A picture I took of this group during a dinner together at AAM2012. 35) Using personal branding to promote the museum. Many ZAMs have staff members, CEOs, and other leaders with a strong social media presence. Here’s why your museum needs you to have a personal brand and here’s a look at two museum CEOs blowing it out of the water. Some of my other favorites are ZooKeeperRick of the San Diego Zoo, Anthony Brown of the San Francisco Zoo (who is also doing a great job showing us his role at the zoo on Instagram), and Dr. Lynda Kelly of the Australian Museum.

36) Using the web to keep folks posted while the museum… um… moves. The Guggenheim Museum launched the BMW Guggenheim Lab which is a moving mobile laboratory traveling to nine major cities worldwide over six years. The main way to follow it and keep updated on this cool initiative? The web.

37) Asking the public for strategic direction.  The Smithsonain put out a call to action on YouTube for online audiences to “Voice Your Vision.” The initiative invited folks to create their own videos and create content to share with the SI. They received many insightful responses, including this one.

38) Let online audiences “dig in” to information that interests them. Speaking of the Smithsonian, this week they launched a new campaign called Seriously Amazing which features an interactive new site that allows users to sort questions thematically and explore topics.

39) Showing folks why they should pay you a visit. XLVI Reasons to visit the Indianapolis Museum of Art are right here.

40)  A completely crowd-sourced exhibit. The Walters Museum just finished displaying Public Property, a participatory exhibit curated entirely by the public. First, the public voted on the title (“Public Property”, then chose the theme (“creatures”), and finally chose which artworks they wanted to see at the museum.